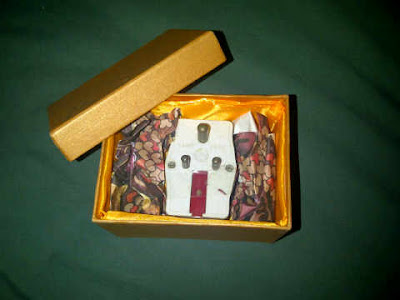 Sometimes the best thing about re-organising photo folders in my computer is stumbling upon a long-forgotten picture that brings back such nice memories of intimate moments.
And this photo of a rounded three-pin plug did just that!  At this point, I don't even remember when this picture was taken.

Anyway, my brother and I passed this to each other on many occasions.  It almost became a competition to see who could leave it with the other, of course, surreptitiously.

I think I started this silly tradition by saying I didn't need it and that he would probably have some use for it.  He refused but somehow I managed to accidentally on purpose leave it with him.  Then one day, I found that it was in my car!  Hmmmmmm sneaky!!!

So we kept this up for a while.  He'd get it back and I'd call to let him know or he'd slip it when he came by or put inside a plastic bag of things.  Then I'd send things over with the plug.  When he eventually found it, he would think of how he would leave it with me again.  And that's how this innocent plug yo-yoed between our homes.  Once it even went to Sabah also.

I don't know where it is now and who was the last to have it.  But it is a nice memory that makes me smile.

It's been two years since he has died.  I miss his dark humour and his practical way of looking at things.

Most of all, I will remember him being supportive during a difficult time of my life and for that I will always, always love that about our relationship.  We show up when things get tough.