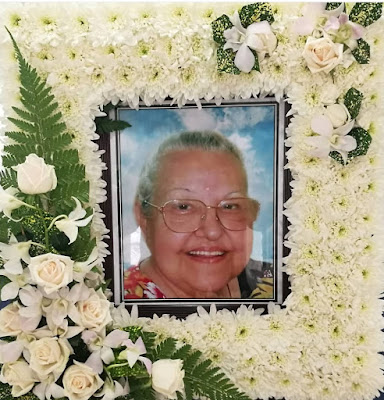 Mom Myra has been gone a year.  It has been twelve months of living life differently since she passed away.

We missed her most when Cayla was born because she predicted a baby girl for Jared and Gwen, long before Cayla was even conceived.  But we also knew that if she was still around, it would not have been possible for us to be in KK for the birth of our first grand-daughter.  It's a bittersweet thought.

While she was alive, our plans revolved around her.  Period.  There was never any question about this as far as Stephen and I were concerned.  Either one of us but usually both of us stayed put for every Mother's Day, Birthday, Christmas, New Year, and whatever else was being celebrated!

Mom spent her last and 82nd birthday (14 August 2018) in hospital.  In fact, in the wee hours of the morning, she was wheeled in for some procedure.  Stephen and I waited anxiously for her and she came back to her bed, in the late afternoon, slightly disoriented but also grumpy.  For us, it was a good sign.  She took one small piece of cake which was a gift from the hospital but refused anything more.  She was just tired from being there since 3 August 2018.  She kept asking to go back to her nursing home.  She said that it was her home and that the people there would miss her.  She wasn't wrong because the manager and nurses treated her like family.  The Econ family were always concerned for her well-being.  Mom was blessed that she always had good people taking care of everything.  That would include Stephen and me because we made all the critical decisions about her health.

When she was discharged on 16 August 2018, she was so happy to return to her bed and to see the familiar faces.    We also felt a sense of relief that she was back in her comfort zone.  Nearly two weeks in hospital was no fun for her or for us.


Mom's left hand was often like this picture.  Whenever I could, I'd peel the three fingers out and massage them slightly.  She'd move it around when she heard music.

Mom and Stephen sang together on different occasions but the last time was on 21 August.  They sang Ramona and Jinkli Nona and everyone was laughing and smiling.  All those on that floor enjoyed the positive vibration it sent around.  It was a sweet moment for her, for all the other residents, and the nurses.  I think mom had the best interaction with Stephen because he knew how to make her happy and he could entertain her with his shenanigans.  It was also the last time that Stephen would see her animated like that.  On 23 August, mom went into a sleepy mode.  She was less responsive and later unresponsive.  We were told to expect the worst.  Nobody thought she would make it through that weekend.  Jared and Gwen arrived from KL to be with us and to see their grandma.  Her situation didn't change much and they left on 26 August with a heavy heart but also knowing that they couldn't do anything more.

It was hard for them to see this usually sprightly woman just laying there. It was also very difficult for us to see mom as anyone other than her spunky self.  She always had a zest for life and living.  She fought so hard to be better and I don't know anyone else with so much grit and determination.

Over the last six years that I had spent nearly every day with her, a feat of which I can proudly claim, I learnt about who she was, in a very personal way.  She was selfless in many aspects, generous to a fault, and yet full of dignity as a woman.  She always put on a brave front and was fearless in the face of adversity.

Mom Myra and I weren't close when I first married Stephen and never would I imagine that we would one day get to a place of mutual respect and admiration.  She often told people I was her daughter.  There is a crooked road we follow sometimes and if we stay on course, it could lead us to one where the view is lovely and peaceful.  I'd like to think this is the road we both travelled.

I always reassured mom that I would be there for her, especially in those last months.   When she was still alert, she was always loving and caring.  She always told me to go home and rest, to not worry about her and to be with Stephen.  Towards the end, when she was mostly sleeping, I hoped that knowing Stephen and I were sitting there by her bedside, made her feel some comfort.  All we are sure of is that we did our best.  We are told that we did do our best but what is more important is that we believe we did all that we could for her; especially after being told she wouldn't even make it through 2016. She hung on for 2 years more.

When she went downhill and was in a kind of limbo, we played songs from her church-going days and whether she was able to interact with us or not, she was able to hear the music and lyrics.  We hoped it would keep her thoughts focussed on our loving God.  Sometimes those songs were for our own spirit: to remember that we have to trust God's timing and to let go.

Almost exactly one month after being discharged, mom passed away at 01.40 am on 17 September 2018.  Peacefully.  I say this without exaggeration because there was no pain, no struggling, but just slowly easing away to the other side.

On 16 September night, as per normal, the nurses would update me around 10 pm about her condition and we felt that it was necessary to go check on her because she seemed to show a sudden deterioration.  We didn't know if it was the right thing to do.  We didn't even know if it meant anything after many episodes of thinking it was that time.  We thank God for the wisdom to have followed our instincts.  I had never been at the bedside of anyone who passed away. Mom's BP and SpO2 were low and sometimes undetectable by the respective devices.   Even at that stage, I still thought she would make it through the night.  It seemed sudden because when we left her in the late evening, all her readings were still in the acceptable range.

Just before she pulled her last breath, mom lifted her right hand in the air, after being motionless and almost lifeless for the last few days.  When she did that, I had a moment of confusion.  I wondered if she had wanted to speak or if she was in pain?  Then the nurses rushed over and said that mom had gone.  I didn't cry.  I couldn't.  It was so unexpected even if it was expected.  I just stood there feeling numb.  I just saw life abruptly end for someone I had come to love and respect.  It was a humbling and unexplainable moment.

Mom had a beautiful send off.  She had always spoken freely of what she wanted and even had an outfit chosen.  Three days and two nights at the void deck of her choice, behind the church, for friends and family to pay their last respect.  A meaningful mass celebration in her beloved church was held on 19 September.  Then finally her ashes laid to rest in the sea, off Changi Point on 20 September.  It is good that we didn't have to second guess each other.  Mom made it easy for us until the end.

And little did we know, this hand was there.  It wasn't always there but somehow this is where it is now!  How poignant and co-incidental that this would be mom's final home!  With the finger pointing to the heavens and a reminder that it's like the last piece in the jigsaw puzzle of mom's life.

We talk about her still.

We miss her still.


Posted by SFGEMS at 12:00 AM No comments: Links to this post

I was watching TV when I looked at the clock; it was just after 2 pm.  I had a bit of sudden deja vu.

There was a long period when my eye would always be on the clock as I usually had to leave the house at 3 pm to catch a bus to Toa Payoh Central,  get some snacks, and then catch another bus to see my MIL Myra.

At that time, my life was separated into before, during, and after visits.  Things ran like clockwork.  It became the norm for my daily routine.

Today, I suddenly had the inclination to jump up and get ready but I had no need to.  That phase of my life is over now.  It's strange how old habits unexpectedly kick in, out of the blue.

So I got online to view old video clips and photos of her.  I am so glad that I had that time with her.  Those moments are my treasures. 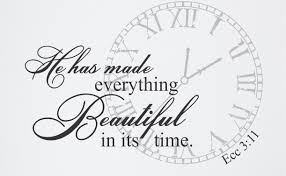 My immediate family nucleus is small.  There are just five of us: four adults and one baby.

There are only just, literally, a handful of us and we are immensely blessed to be able to connect daily and to have conversations about what goes on in each other's lives.

Truly it is a little world with only five citizens!  It is also a private world.  Ever since I left Facebook, I hardly know what's going on with other people and I suppose the same applies that they don't know what is going on with me.  In a way, it is a nice change from what it was before.

I'm not completely cut off from everyone because I use whatsapp but it's less intrusive.

Those that stay in touch, get information and/or pictures that are new.  Somehow it seems to be a more intimate setting; to selectively share details rather than publishing for all and sundry to view.  I used to feel that the more I showed or shared, the better but not anymore.

My family is truly a little world created, and also filled, with love.  Sometimes I am so happy that I need to pinch myself.

I thank my God for everything.