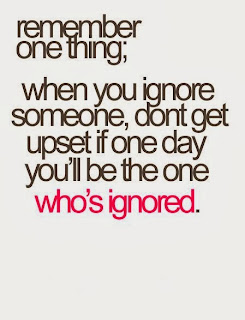 Much of my thoughts are about old people since I gravitate towards them more than I do to young babies or children.  Maybe that will change when I become a grandmother, I don't know.

I am always curious when people visit and equally curious when they don't visit their 'loved' ones in hospitals or nursing homes or wherever they may be.

Often I think it has to do with a history of events that had transpired and which, to coin a phrase, has not yet expired in their minds.

Today people rarely visit the elderly because it is no longer 'cool' to be seen doing that.

When I project myself into the future, I wonder how I would feel if I was left alone without visits.  Would I be sad or upset?  I don't think I would.  If I am able to read, I'd be reading books.  If I am unable to read, then I'd listen to music or watch TV.  I hope that I would still be able to use a laptop as there is a never-ending stream of things to do online.

I'm drawn back to wondering why old people are ignored.  Is it because the family no longer find any benefit available?  Could it be because they cannot bear to see a loved one in poor health?

The reality is that old people need attention.  When I lost my aunt early this year, part of my grief stemmed from the fact that I could have and should have done more for her.

There is no turning back.  Sometimes, there is no second chance.

Posted by SFGEMS at 11:11 AM No comments: Links to this post

I've always wondered if this was designed by someone who actually cooks because I've seen so many kitchens where this is not featured.  Is it something from a home designer's mind or is this the product of someone who did actual O&M studies about this kitchen work triangle?

My grandma and mom made wonderful meals and never once did I hear them speak about the layout of the kitchen.  I think it's safe to say that there was nary a complaint from them because they were only concerned with being able to put food on the table.  It probably never occurred to them that setting up the kitchen space in an effective way would speed up the cooking/preparation process.

Where I am now, the refrigetor, stove and sink are all arranged in one straight line.  Often I wondered if there would be a huge difference if I had the above layout.

I've come to the conclusion that if we don't think about it, it doesn't affect us.  I am also of the opinion that as long as things are where they should be, then one can be just as efficient in any kitchen after getting used to it.

Posted by SFGEMS at 12:12 PM No comments: Links to this post 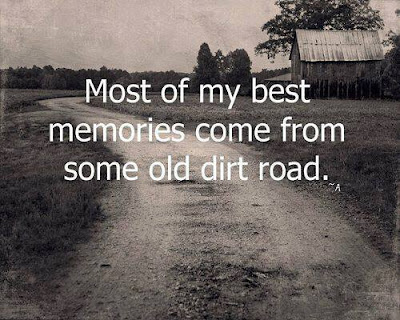 Stephen probably has many memories of dirt roads because he lived in a "kampung". The rain was his toy and the nearby cemetery was his playground.  He said there was a cow farm nearby and that was a favourite place to pass his time.

On my side, I remember browsing through rubber estates and running around bare-footed. I can reminisce about chasing butterflies, catching tadpoles and playing outside until the sun went down.

Yet memories aren't always made from some old dirt road!  Sometimes they are made in a concrete jungle while cycling, between midnight to three am, around Singapore's famous Orchard Road when all is quiet.

Not me, of course!

Stephen and the kids (when Jared and GG were here for a holiday) went out a few nights to cycle while I manned the fort (translate that to staying at home).

They explored Singapore by night and this remains the highlight of their cycling adventure, at least, until the next episode when they plan to cruise along the East Coast!

Here's a video of that ride earlier this year, courtesy of GG. What a steady hand she has!!!

This almost made me wish I was with them.  Maybe next time.

Stephen bought us matching tee-shirts in an effort to entice me.  I think we all look great! 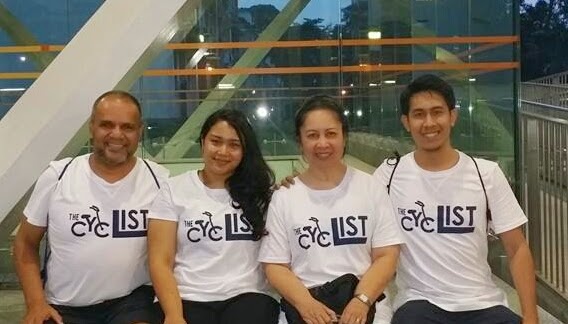 We all long for someone to come along and turn the hourglass when everything hits the bottom.

For this reason, even when I don't feel like it, I go out on a limb for others because I could very well be the only person turning the hourglass for that someone. Even if I am unable to solve the problem or have any answers, I believe that listening and responding is better than nothing.

Often I don't have any particular reason to do what I do except that I probably have a higher level of empathy.  I feel for others and understand that people need to know they aren't alone.

I can be alone and I'm never lonely but there are hundreds of people who feel left out and marginalised.

My morning and night prayers always start with these words, "Bless all the old people in the world, the little children, the hungry, the lonely, the sick, the unloved and all those who are alone".  It's something I've prayed thousands of times.

If you've reached the end of this blogpost, think about someone who needs their hourglass turned and go turn it around.

Posted by SFGEMS at 2:22 PM No comments: Links to this post

When I was in my teens, I remember we baked some cakes, made biscuits and all sorts of other stuff with mom's supervision.

While it was fun then, I don't remember that anything we made was mind-blowing or exceptional but we, my siblings and I, ate whatever came out of the oven with such gusto. Those were the days when we weren't fussy and hadn't yet learnt that there were cakes and there were cakes.

Since then I've mostly bought cakes from friends or ordered them from stores or hotels.  I never really gave a thought to baking. I figure that there are so many people out there who can do such a good job and who, obviously, enjoy it so much that they excel in their craft.

Anyway, a very good friend of mine (PG) was willing to share her recipes with me.  Since I'd moved to Singapore, she'd given me some of her cake recipes because I asked for it.  She makes absolutely delicious ones and it made sense to want to reproduce what she does, effortlessly, I assume.

First I should mention that she's one of those rare, kind and generous people who share recipes without a second thought.  I know that some guard their secrets and take them to the grave!!

Her willing spirit and encouraging words prompted me to just give it a go.

I have to say that PG was right.  It's not rocket science.  If you have the right ingredients and you have the heart, it'll come out nice.

The banana cake smelled divine and tasted heavenly. The texture wasn't what I expected it to be but it was my first attempt.  My chocolate cake came out better and, as my friend promised, it was delicious.

Stephen was surprised that I had made it from scratch because I am more of a buy ready-made cakes kind of person.  He liked both of the cakes!!!  What's important is that I also liked them very much.

My next attempt might be a fruit cake!  Hah!

I need to wish myself luck!

Posted by SFGEMS at 10:10 AM No comments: Links to this post

Groan if you want...

I know some will find my loving posts irritating. Well, groan all you want.

The thing is that loving posts are so few and far between.  Most people find that sharing feuds, fights and foibles are an integral part of their life.  Maybe it's an indirect way to show the world how tough they are and that they can take on any challenge the world throws at them.

I think that I have just as  much of a right to share the happy things and the positive vibes because, well, we need it.

People curse and swear in real life and online.  So I figure that I can bless and spread goodness in the same way.

If I am going to be exposed to people saying mean and ugly things then I'm not going to hold back  when I feel love or loved.

Since I recovered, I feel so much  better.  I'm healthier and my strength is increasing.

Nobody really cares because all they want to know is about suffering and problems.  They want to be informed if someone is worse off or who has bigger issues to deal with.

Let's change that.   Let's talk about the love and bless those who are better off and be happy for those who have a better life.

It's not as easy as you think.  But it's not impossible, either.

The image above really touched my heart.  It's who my Stephen is!  While I may be the love of his life and the children come a close second, I know that I'll be having a tough fight for first place when the grandkids come.  We'll see!!!

Posted by SFGEMS at 1:11 PM No comments: Links to this post 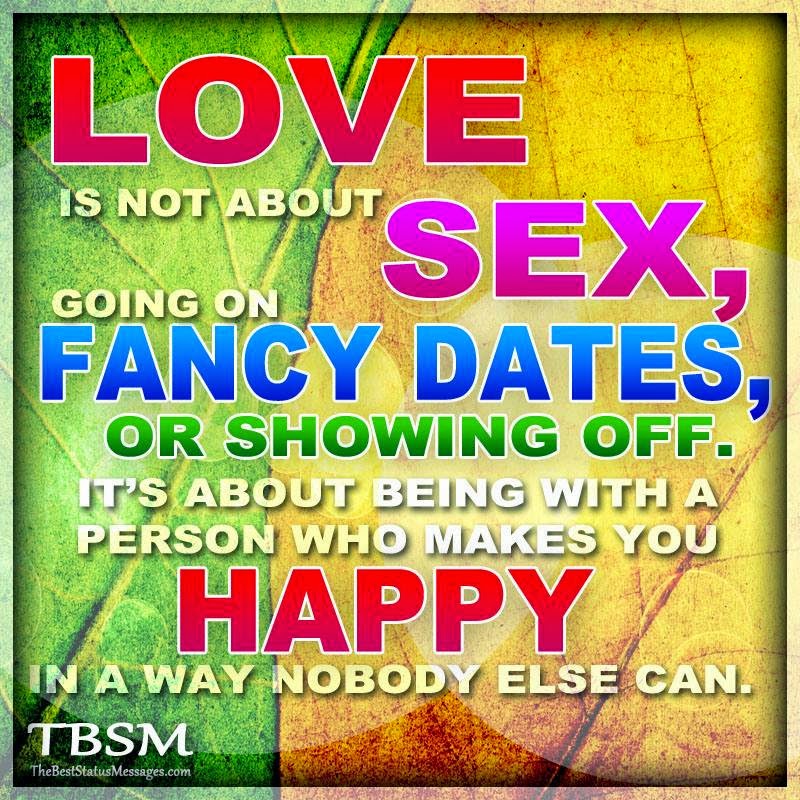 This might trigger extra hits as people are looking for love, sex and more.  I'm sorry to disappoint because at my age, it's no longer about any of these things.

Well, there is love and, yes, there's sex (still) but not in the sense of what is portrayed on TV or books.  It's more of reality and the fact that sitting at home watching TV is just as good as a night out on a fancy date.

Those who think that only a fancy date signals a great time is wrong.  It only means that the craving for excitement outweighs the being together.

Sometimes late in the night when we're in front of the TV, watching X Factor or some other show and munching on our snacks and commenting about the performers, there's a special kind of magic in the air.  For me, it's a time of peace and calm.  A moment that is so precious because it's like we're the only two people in the world and, to be corny, it's romantic.

Often Stephen would look at me, smile and say, "this is the life".  Yes, this is our life.

Nothing fancy at all but totally real.