There was a time when I found sleep to be the best escape from everything that hurt me.  It really helped when the mind needed rest from the painful realities of life.  However, I find that this notion has changed because time does heal all wounds.

Even the things that used to cause a terrible ache in my heart have now become dull over the years and become something I hardly think about because I've gotten so used to it.  This isn't really a bad thing because it is a better option.

For too many years, I used to dread today but, of late, I've come to treasure it.  I no longer use it as a time to feel sad and instead I take it as a checkpoint for how far I've come since then.

Only good memories remain and much of the sadness has been replaced by happiness when I think of where he is now.

A mother's thoughts are always about their children, whether living or dead.  And they are always good ones.

The older boy just turned 28 and the younger is forever 2; in my head and heart. 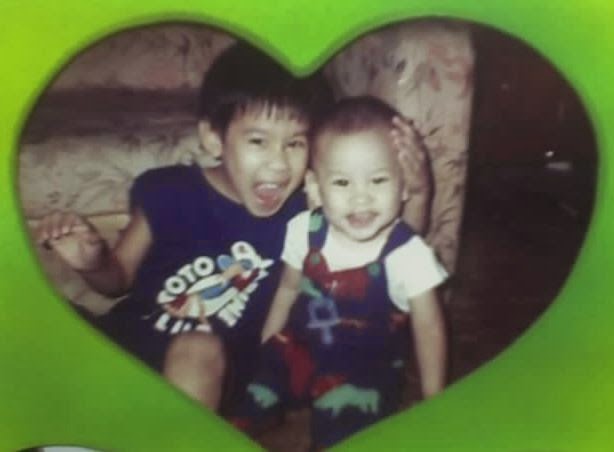 Posted by SFGEMS at 8:08 AM No comments: Links to this post 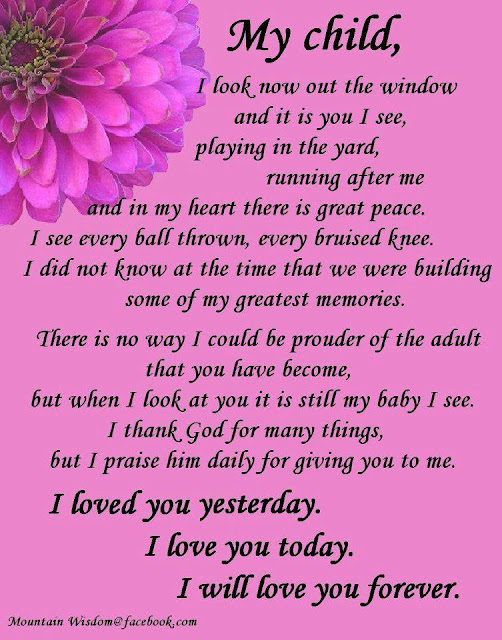 D and I love you so very much.
May you never forget that you are abundantly blessed and our beloved child in whom we are well pleased.

The magic is in the telling ~ Dr. Jacob L. Wright


This is partially true for me because sometimes it is the one who is telling who holds the magic.

Words are my weakness.  In general, I gravitate towards people who write or speak well.  There are many who are able to say what I feel better than I would have been able to express.  Facebook has shown me that I am not alone in my thoughts and feelings. Kindred spirits abound.  I do not need to know them personally.  Just knowing that there are others like me is enough.

I have just completed a six-week online course conducted by Emory University.  I discovered this when someone introduced Coursera to me and I learnt a new acronym: MOOC (Massive Open Online Course).

Never would I imagine that studying again would be on my agenda.  I have to admit it was the title "The Bible's Prehistory, Purpose and Political Future" that lured me to sign up.  In fact, I had forgotten about it until a reminder appeared in my email.

Anyway, from 26 May until yesterday, I was immersed in another world whenever I logged on to Coursera.  I did my best to keep up and follow the forum discussions as well as stay up-to-date with all the work. I did fall behind when I took a short holiday but I caught up as soon as I was able.

Dr. Jacob L. Wright, Associate Professor of Hebrew Bible, brilliantly led us through the course.  His impressive credentials and passion for the historical value of the bible came through in all the videos and/or interviews he did.

It was such a treat to be able to hear him expound on the manifold aspects of the prehistory, purpose and political future with such ease and authority.

My favourite interviews were the ones with Professor Tamara Cohn Eskenazi.  I loved how she made her views so clearly and, dare I use this word, flavorful.

At the end, I was left with a desire to know more and this is what studying is all about.  It leads you to the next step and onward because there is always something to learn every step of the way.

I had hoped that more of the New Testament would have been part of the course but it was wishful thinking because I am now informed that the "Bible" for Jews (as well as for early Christians) is the Old Testament. *Hat tip to Dr. Wright for clearing this up.

Although I started out very much a novice, Dr. Wright does cater to people like me.  He doesn't forget that we are participants as well.  This is what makes him endearing.  He doesn't neglect the ones who are new to the subject while being able to easily engage the others who have a deeper understanding of it all.  For this, I found the course extremely gratifying.

At the end of it all, I believe that I might have shifted the knowledge notch just a teensy weensy bit and I have found some answers to questions that were dangling somewhere in my head from I don't know when.  I know much more now than six weeks ago.

Hence, the magic is in the telling.  Dr. Wright has that magic.

Posted by SFGEMS at 9:11 AM 2 comments: Links to this post

Half a year has gone by already.  I just don't know where time has gone.

Stephen often tells me that once American Idol is over, time just picks up speed. Hahahahahahaha.  We didn't even watch it this year.  How many have there been? Thirteen!  So he's said it that many times!  Funny guy!

Then when 9 August comes  and goes, he'll say, "Time to play Christmas carols now".  The truth is that he plays them as and when he feels like it.  This always makes me smile because thoughts of Christmas bring happy memories.

June ended with a nice Eurasian meal with cousins and some catching up.  Sometimes I am so happy I could just burst.  Actually, I was so full that I felt I could burst.  I ate too much! :-(

So July has started!  The kids are coming again for a short stay and we are already thinking of how to cram everything into those days.

I hope I shan't neglect my blog as much as I did in June.  After all, what else would there be to do later in life except to flip through these postings and reminisce.

Posted by SFGEMS at 9:11 AM No comments: Links to this post