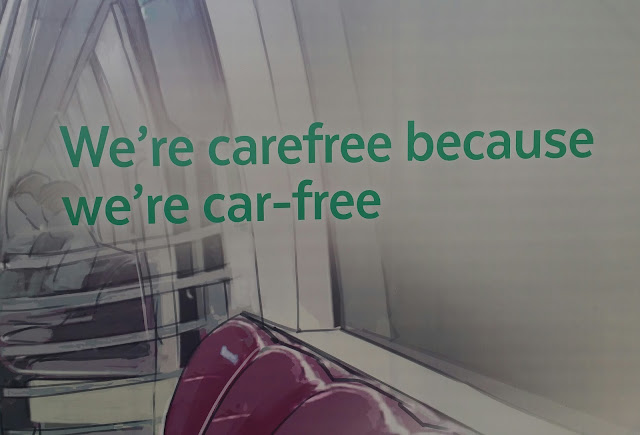 I saw this huge banner outside the NEX Mall recently. I guess it's to encourage people to take public transport. It caught my eye because it's catchy and does epitomise my life here in Singapore.

I suppose it only means much more to people who once drove daily. When I look back on how many hours I spent behind the wheel of a car, it boggles the mind.

Since moving away from the hustle and bustle of KL living and into the concrete jungle of Singapore, I haven't really felt a sense of inconvenience without a car.  I thought I would and maybe I did have some fleeting moments of "I need a car" when I first arrived but now after nearly five years I don't even think about it.  I've adapted well.

Even when I am back in KL, I hardly ever drive now.  I do when I have to but usually my son or daughter-in-law takes the wheel. I used to not like being a passenger before.  I always wanted to be the driver.  But they are both excellent drivers and I've learnt to take the back seat.  I can place my trust in them.  I don't say this lightly because there are many horrible drivers around.  Also I pride myself on being a rather good one and when I let someone drive me around, it's not just for convenience but also because I have faith in their driving skills.

Sometime over the last few years I had developed a new sense of being carefree and car-free.  This has to do with getting used to moving around via trains, buses and/or taxis.  I've yet to use uber but I just registered.  :)

It's a good advertisement!  I like it.  It suits me.  It works for me.

Recently I was chatting with a friend and he said that he hated it when people told him to "Move on" or "Move forward" whenever he lamented about anything.  It amused me because even if he didn't want to, he was moving forward.

No matter how we dislike the notion of letting the past go, we unconsciously leave a bit behind each day until, suddenly, it no longer becomes an issue.

I know there are people who do mean things daily and don't think twice of it but my friend is one of those who knew he did mean or terrible things.  He regrets having done that.  He wishes he hadn't done them. However, he has moved on, knowing that he can be different from who he was.

In a way, this is true for all of us.  We shed the skin of who we were and we are a new person each and every day!

Email ThisBlogThis!Share to TwitterShare to FacebookShare to Pinterest
Labels: Being who you are, Change, Friends, Just stuff, lessons, Life, The Past, Thinking out loud, Thoughts
Newer Posts Older Posts Home
Subscribe to: Posts (Atom)