It's a little more than all of these things.  These are just the starters. Starters in what is much like a having a meal.

The main course is

Until you've ..........
counted to ten before you burst a blood vessel
when you see toys all over the floor

wished for more energy when the boys won't go to bed
and you're already about to collapse!

done their homework for them because,
well, there wasn't enough time to make them do it.

peeped at them sleeping and your heart feels like
it may just explode with all that you are feeling
.... you haven't known love.

I have known this love.   Twice! 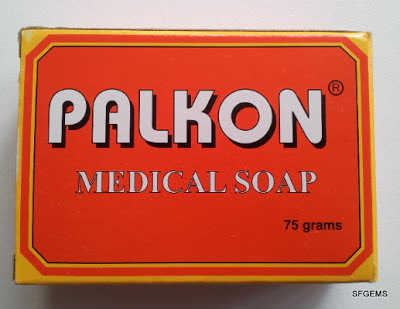 My mom-in-law (MIL) has many old stories to share and often when I say something that jogs her memory, she'll remember something from the past when money was tight and hard to come by. Despite all the financial limitations, she did her best. She repeats this often, "we were so poor but we were really happy!". Usually this would be followed by a wistful smile and a faraway look in her eyes.

As most mothers, one of her main concerns was that the kids were always clean and healthy.  Stephen remembers that they used this soap when they were still small children running around the neighbourhood.  They played in the mud, in the sand, in the grass and even in the nearby cemetery. When they reached home with all the sweat, dust and dirt, the first thing to do was shower with this soap.  They never had rashes or sores or any skin problem and they always smelt like they stepped out of the hospital.

In those days, a bar cost S$0.20 and today it is S$0.80.  My mom-in-law still asks for this every once in a while and we buy it for her. I think that when she showers in the morning, the smell of the soap takes her back to those days in Rosyth Road.

She said that the neighbours called it 'dog' soap because people bought it for their dogs.  She laughs when she remembers this anecdote.

These days, I am seeing my mom-in-law with new eyes.  I admit that I hadn't always felt this way about her but this last year has opened my heart, just that little bit more, with each sharing of her life story.

All of us have an interesting story to tell. All it takes is someone willing to listen and to write about it before it is lost forever.

Even when I thought I knew everything about my son, he surprised me when he revealed that he had registered to be an organ donor.  I didn't know when or why or how.  I think I was speechless.  He found it fun to watch me squirm when he said, "I am an organ donor for everything, even my skin".

It wasn't something I had expected to hear and as the shock wore off, it began to sink in that I had not expected this.  We always think we know our children but we never really know them.

Here was a young man, in his mid-twenties, thinking of helping others, beyond his life.  I have to admit that I felt a strong sense of pride.

No one needs to tell me.  Where Jared is concerned, I know I have done well.

Posted by SFGEMS at 8:22 PM No comments: Links to this post 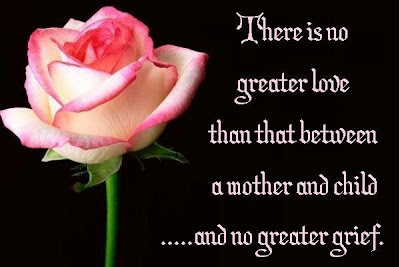 I don't know if this is true but the loss of a child is perhaps more painful than other losses because of the physical connection that was once there.  You lose your parents, siblings or spouse but that pales in comparison to losing the 'human being' that was once living inside of you.  I may be wrong but it's my opinion that losing a child is much like losing a physical/spiritual/emotional/tangible part of yourself. 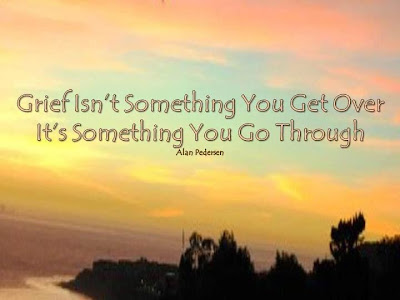 I remember that, when I lost Douglas, many people told me to just move on and to get over it.  It was difficult to know what to do or how to feel.  Looking back, I have realised that it's something you go through and there really is no timetable to how long grief lasts.

For some, it's been a lifetime of miserable days and I believe it need not be that way.  Some people feel that not to laugh or love again means that the loss was more profound than for someone who has learnt to do it again.  This cannot be true.

I've known people who refuse to remarry because they feel it would tarnish the 'love' they have for the one who died.  I don't judge. Real love never ends and it is eternal.  It just exists in another realm.  It will never co-incide but it runs parallel to our life.

My brother once said, "Let the dead rest in peace, and the living go on living".  Those words are true today as they were, when they were said years and years ago.

The death of a loved one is never going to be something we understand or want to experience but it's inevitable.  The side effect of losing someone is that it makes you emotionally stronger even when you don't realise it. 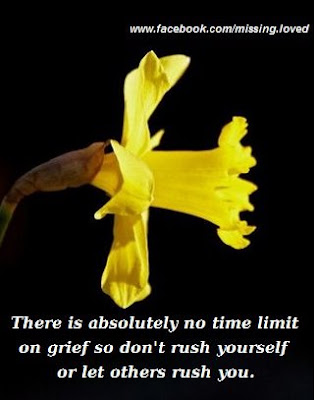 When Doug died, I did what I thought was best.  I shoved grief aside and kept it in KIV for when I would be ready to deal with it. I didn't realise that it doesn't work that way.  Three months down the road, I was in sitting in one of the front pews in church and the tears came and the grief just overwhelmed me. The denial and everything that I had successfully suppressed exploded in sobs. Despite the sadness, I remember being so embarrassed at the sudden outpouring and in public, too!

When Eric died, I did what everyone thought was best. I cleared his things, I dismantled his cot and kept all traces of his short life away from sight.  I put them in a small suitcase and locked it up.  This also didn't work.  It accentuated the grief and the letting go of everything before I was ready made me feel even more depressed.

The moral of it all is that we have an inbuilt mechanism that looks after our well-being.  We must listen to that quiet voice and follow its promptings.

I reconciled with losing Doug much earlier for without doing so, I would not have been able to start a new life.  With losing Eric, I have taken a very long time to heal.  This year, I think I am almost there. My thoughts are not so much of longing and wishing anymore.  I miss him but it's how I would miss anybody else who is loved and who is not with me. 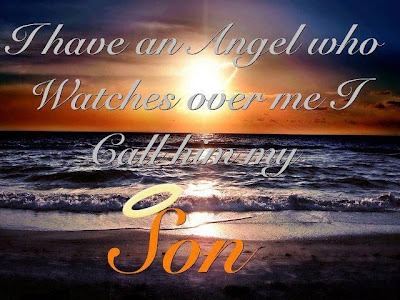 Note: All pics taken from FB pages.
Posted by SFGEMS at 1:33 PM 10 comments: Links to this post

He was born at 1.17 pm.  Twenty-seven years ago, my little miracle was created.

They say that miracles happen when we least expect it.  Untrue, of course, because I was expecting my miracle for nine months.

When I look back at all the years, I can only remember the funny and loving moments.  Those are vivid memories.

People always have good things to say about him and, in general, he wasn't a difficult child.  I would have to strain my thoughts to recall something untoward.  I suppose it's love that makes the difference.

Having a child is much like being married because the same words apply, "from this day forward, for better for worse, for richer for poorer, in sickness and in health, to love and to cherish, till death us do part".


Happy Birthday, Jared!
You are the greatest miracle in our lives.
We love you.

What a wonderful world...


Everything about this image is beautiful.  The words, the colours,  the layout, the flowers, the little bird, the music notes in the background.  Everything about it is just wonderful.

It's the end of the day and Stephen is at work, doing the late shift.  I've just come back from a walkabout.  Feel good after 30 minutes of brisk walking.  While cooling down, I got dinner going.  It's in the crockpot now and smells are emanating that imply I did it right.  Hahahahaha!  Cooking for me is not an art nor a science.  I just look at recipes and think, "okay, this is doable".

The wonderful thing about my life is that my husband eats everything I make.  Often he will ask, "can you make this again?".  Truthfully, I answer, "Maybe".  Hahahahahahahaha

Long ago, when people asked, "How are you?".  I always said, "Good", no  matter how I felt.  After all, it's just a common question that many ask but it doesn't mean that they really want to know.  So whether I felt good or not, it was a standard answer.

Posted by SFGEMS at 8:11 PM 4 comments: Links to this post